Knowing Your Players and Their Kicks

There is a lot of advice on the technique of running role-playing games out there. Referees think a lot about how to make fun games for their players, usually their friends. Thinking about the next game and scenario and optimal rule design becomes a hobby within the hobby. I'd bet that Referees spend a lot more time thinking about and planning for the next game than they do playing.

In light of that, Referees will trade tips as part of their meta-hobby. We learn from each other and we get to enjoy that hobby within the hobby by talking to other Referees.

How to run a game that is fun for others depends, however, on what it is we think we are doing. And the debate about what the role-playing game is, and what it is supposed to be, is as old as the game itself. Long-standing disagreements continue, as witnessed by Jon Peterson's new book, The Elusive Shift (my review here).

Already in 1977 (White Dwarf #1), Lewis Pulsipher pointed out the existence of two kinds of players:

He described "two D&D styles," in what must be one of the first published uses of the word "style" to refer to an approach to role-playing games. (It's normal now for people to talk about "play-styles.")

It is worth noting that the first D&D players really did come, by and large, from a merger of two earlier groups: table-top wargamers and science fiction fans. His perception seems to testify to that fact.

Pulsipher believed that D&D was intended to be a wargame (types 1), but that most players did not play that way, aiming at fiction instead. For what it's worth, Pulsipher identified himself as a player who primarily liked to defeat monsters (1a). Clearly, the D&D players who were joking around really annoyed him. He wanted a serious combat challenge instead.

Pulsipher deserves credit not only for one of the first typologies of role-player interests, but also in focusing on differences in what players want from the game as the source of the discrepancy in play-styles.

Gary Gygax, who was quite interested in the international market for D&D, surely read Pulsipher's article because he followed White Dwarf. He seems to echo it in the original Dungeon Masters Guide (1979, p. 9):

Of the two approaches to hobby games today, one is best defined as the realism-simulation school and the other as the game school. AD&D is assuredly an adherent of the latter school. It does not stress any realism (in the author’s opinion an absurd effort at best considering the topic!). It does little to attempt to simulate anything either. ADVANCED DUNGEONS & DRAGONS is first and foremost a game for the fun and enjoyment of those who seek to use imagination and creativity.

For fun, excitement, and captivating fantasy, AD&D is unsurpassed. As a realistic simulation of things from the realm of make-believe, or even as a reflection of medieval or ancient warfare or culture or society, it can be deemed only a dismal failure. Readers who seek the latter must search elsewhere.

There is a lot to unpack in Gygax's words here. I won't finish the job in this entry. It's complex. For one thing, he insists its a game not for simulation, but he then says it's "foremost a game for the fun and enjoyment of imagination and creativity," and for "captivating fantasy." How is captivating fantasy not simulation? Well, Gygax's rules were consistently criticized in the '70s for being "unrealistic" in the way hit points, armor class, Vancian magic, etc., worked. The problem was partly that the critics chose the wrong word when they said "realistic." They really meant two things. They meant that it emulated their own favorite fantasy fiction poorly and they meant that it lacked verisimilitude. Gygax consistently (deliberately?) misunderstood them and countered that elves and dragons are not realistic anyway, so there was no point in the argument. It's a poor counter-argument that one encounters to this day. Gygax's argument was also aimed at competitor games like Chivalry & Sorcery (1977) that claimed explicitly to attain greater "realism" (in the guise of historical medieval accoutrements).

Anyway, Gygax's misunderstanding aside, he clearly says "this is a game and not much else," even though he argues otherwise elsewhere.

In short, Gygax's views on what players wanted were not very insightful. Instead, they were self-serving. I include him here because he's a major figure in the evolution of RPGs and his views demonstrate how little thought was necessary to create and market a role-playing game.

Glen Blacow started as a D&D gamemaster in Boston in 1975. He and Mark Swanson set up a new APA zine collection together in Boston dedicated primarily to thinking about how to be a better GM.

Blacow's efforts led to his seminal essay on the types of players and their different goals in play, published in Different Worlds #10 (October 1980). He formulated a list of these reasons and analyzed why they were different. He observed four types of RPG player, which would become "classic" distinctions in this area of thinking.

This is a direct ancestor of the Forge online forum game theorists of the early 2000s, whose pundit Ron Edwards argued in 1999 (wrongly, in my view) that there were basically three incompatible aims in role-playing games. In fact, Edwards' view was borrowed immediately from an earlier Threefold Model, articulated by 1997. Edwards innovation seems to be the argument that a game can aim only at one of them; that was not part of the Threefold Model.

The last two remind me of advice given to amateur novelists to choose either to write a tale about a plot that unfolds or a story about a character who changes through events. A game, by contrast, is primarily about neither, but it's about the player's victory instead.

Edwards' argument that a role-playing game is "incoherent" if it tries to fulfill more than one of these three kinds of play at once makes no sense to me. Experience shows that individual games can satisfy players with different needs and interests simultaneously, even in the same play-group. The GNS model doesn't take player enjoyment seriously.

Some of the best fundamental tips for gamemasters that I know of now are in the short treatise by experimental role-playing game designer Robin Laws, published as Robin's Laws of Good Gamemastering (2002). They read almost as if they were in answer to the Forge theorists. Laws exhorts gamemasters to be concerned with "Knowing Your Players" and what they enjoy. He lists a set of gamer personality types based on the emotions that they want to feel.

As an aside, I have mixed feelings about the price that Steve Jackson Games set on Robin's Laws. $8 for a 32-page pdf seems like a lot to me. Then again, the contents of this pdf, if taken seriously, are worth many gamemastering blog entries, and people regularly pay five bucks for the download of a short adventure module, so this price is probably worth it if you want to think seriously about making your players happy.

Anyway, Laws' gamer personality types explicitly and correctly credits Blacow for some of the model. In parentheses, I include my observations about what Laws does here.

(B) The Casual Gamer is the friend who shows up to play just to be part of the social group, but has no special engagement with the game. Your best hope for that type of player is that he or she will discover one of the other kicks, as an way to be more engaged, without hindering the immersion of the others in the process. I have known some players like this: they just want to hang out, and if we were watching a movie instead of playing a role-playing game, they'd be just as happy.

(C) The Specialist seems to be a sub-type of player who consistently wants to inhabit a very specific role, revealing a special, idiosyncratic kick. I have known several Specialists. There was one player who insisted that he always played an honor-bound dwarf. That was his kick. Over the years, when we played games that had no dwarves in the setting, he would shoehorn the concept of honor-bound gruff craftsmanlike character into that setting. I knew a player who wanted to play a sexy girl in every game. This was a good role-player with lots of brains and who used lots of variety in character roles otherwise, but that specific vicarious kick always had to be somewhere in there. Then there was a player who always played oddballs, characters who did not fit in and were slightly freakish, every single time. I don't judge these players for their needs, and I swear they were a lot more fun to have in a game than those summaries make them sound, but experience tells me that Laws is right that the Specialist type exists and that it's not just a subtype of "Acting."

Robin's Laws is ancestor of much of a list you will find on page 6 of the Fifth Edition D&D Dungeon Master's Guide (2014). There is a section headed with the words "Know Your Players," obviously echoing Laws, over a list of the different kinds of kicks that different players are seeking. These are given as

The 5e DMG omits Laws' casual gamers and specialists, probably as marginal types, although I don't think they are truly marginal types.

No individual is credited for this modified and expanded version of Laws' list and Laws' Laws is not credited in the book. (Did Jeremy Crawford write this page?)

The DMG list is also remarkably the first gamer typology that I have surveyed to mention two vital kicks that players derive, mentioned by no others:

Vicarious risk-taking does come up indirectly in discussions about "who rolls?" In my experience, players enjoy being the ones rolling to determine their characters' fate. It's more absorbing.

The wonder of discovery is also discussed in passing. Perhaps it is implicitly discussed whenever players invent new monsters, magic items, and settings. But it's not a phenomenon discussed directly much.

What if we put all these models together, making as many distinctions as possible? What if we keep ourselves from trying to lump categories together, but to tease apart the subtle distinctions in player kicks that thinkers have identified? 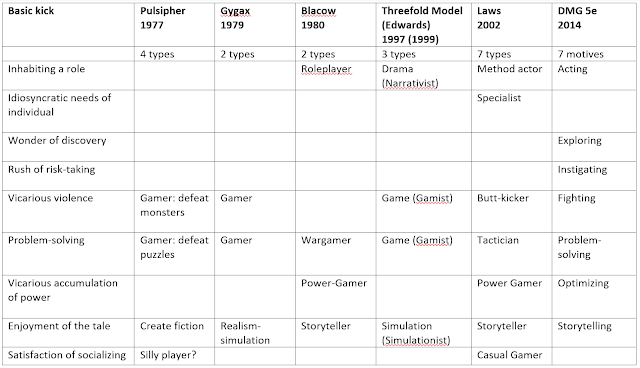 First, we see that there is not a neat distinction between game-players and role-players corresponding to the two original populations that merged to form the RPG player community.

Second, players play for many complex overlapping reasons. There is no accounting for taste. Putting all this together, we get a list of distinct kicks that players get from playing:

1. inhabiting a role
1b. that may entail idiosyncratic kinds of wish-fulfillment, per individual
2. wonder of discovery
3. rush of the risk-taking gamble
4. vicarious violent victory
5. vicarious accumulation of power
6. satisfaction in solving problems
7. enjoyment of the tale
8. satisfaction from socializing with the others in the group--around, during, and through play

Most players derive enjoyment from each of these in different degrees, but the idea throughout these lists is that if you, the Referee, know what your players enjoy most, you can make games that they enjoy best.

Here are several stray thoughts that occur to me after conducting this sketchy survey.

I'm sure there are other lists like the ones I've surveyed here. Let me know if you think of player kicks that have been left out, that don't fit clearly under one of the headings I compiled.

UPDATE: Immediately after posting this, I saw that Jon Peterson had just posted his own take about the same thing, with some of the same points of reference. You can see it here. His entry takes the discussion of player types back before the birth of D&D.